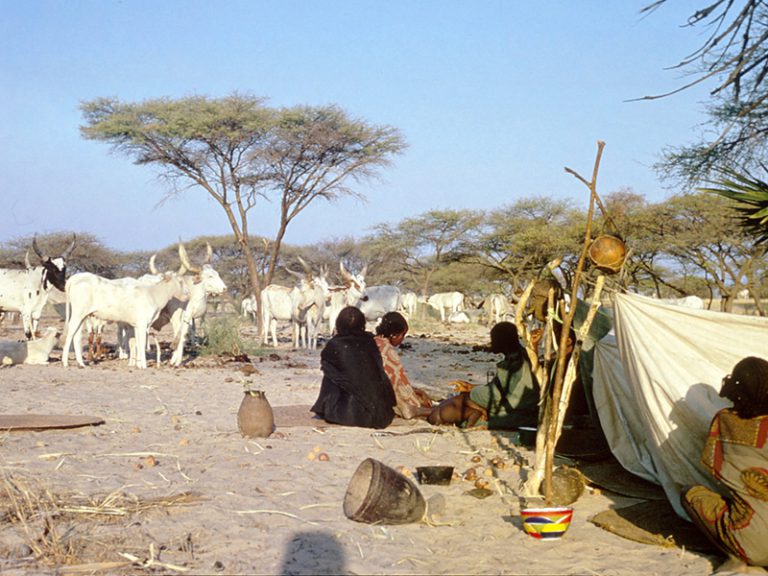 Elements of an answer…

Desertification is a complex process involving climatic, biophysical and social factors, which leads to both decreasing natural environmental fertility and expanding poverty. It is therefore essential to improve the standard of living of the populations affected, while long-term supporting their activities, preserving land fertility and promoting other activities that should alleviate pressure on lands. Desertification is an integral part of the issue of sustainable development in drylands.Desertification affects natural lands, pastures, rain-fed crops and irrigated cultivation.

Most continents are concerned by desertification processes; Africa and Asia are the most affected ones. Areas threatened by desertification cover 40% of available lands. In 2000, 70% of arid lands were already subject to desertification, i.e. 3.6 billion hectares (land and vegetation cover degradation). All scenarios developed by the Millennium Ecosystem Assessment foresee an aggravation of this process in the coming decades.

Desertification
The United Nations Convention to Combat Desertification, adopted in Paris in 1994 and ratified ten years later by 190 countries, defines the desertification process as “land degradation in arid, semi-arid and dry sub-humid areas resulting from various factors, including climatic variations and human activities”.

The causes and processes that lead to desertification vary according to geographic areas and to how man uses land and vegetation. Combating desertification therefore should be envisioned at the local level as well as at the international scale. Three major elements should be taken into account: Desertification problems require techniques, means and actions suited to local contexts. Layman’s knowledge, as well as a wide range of scientific knowledge and disciplines, should be resorted to; Such techniques should be promoted and implemented by local social organisations so as to induce positive impacts in terms of sustainable development; Investing in preventing desertification is more cost-effective than rehabilitating already highly degraded lands.

Increased poverty and inequalities in rural arid and semi-arid environments, as well as the national and international consequences of this evolution (exodus and refugees), make desertification a global concern:

• One third of mankind (i.e. 2 billion people) is affected by desertification;
• These populations periodically suffer the impacts of two contingencies: climatic vagaries and the variability of agricultural prices. Such peoples have little latitude to adapt. Desertification then entails immediate socio-economic consequences summed up in the opposite sketch.

In order to preserve natural environment in arid and semi-arid regions, man-developed techniques are often conditioned by land tenure status. Policies aimed at combating desertification thus should consider from the start land tenure regulations and institutions and their possible evolutions. They should also involve land owners and the various parties concerned.

Desertification-induced migrations to more prosperous areas or to town may be seasonal or definitive. Their most terrible consequences actually concern migrants’ physical and socio-economic precariousness. Migratory flows generate or fuel local, national or even international conflicts.

Unless a concerted action is implemented at the global scale, desertification is due to intensify in the coming decades. Stakes are considerable, as the issue at hand consists in saving the third part of our planet and its inhabitants. Investing in the rehabilitation of degraded lands and in prevention is vital. In order to take up this challenge, all efforts undertaken at local, national and international scales should converge. In 1999, the United Nations Development Programme proposed the notion of GPGs, i.e. global public goods (and ills), in order to take into account the evolutions connected with globalisation. Combating desertification could be labelled as a GPG and a new form of international cooperation could be designed accordingly. This good would include all the techniques used to combat desertification, incentives to their collective implementation, support to the most underprivileged populations, food security and poverty eradication. Combating desertification would then become a set of goods, practices, conditions, information and knowledge.

• Defining a GPG implies the emergence of an autonomous international sovereignty and the implementation of governance mechanisms. The interests of countries, civil organisations, companies and individuals should be duly represented in the process.
• Supplying a GPG requires re-organising bilateral and multilateral international cooperation. Multilateral agreements such as the Convention on Desertification can be seen as preferred instruments to define how to produce and manage GPGs. However, such agreements lack legal means to compel member states to comply with the decisions adopted.
• At the national and regional scales, governments, regional and international bodies, as well as private companies, could be involved in supplying the public good defined as “combating desertification”. Rural funds for the prevention of desertification might for instance become a channel to provide this good. It would be necessary to clarify eligibility and regulations for financing these funds.
• At the local scale, the so-called “combat against desertification” public good would be produced at the decentralised level of rural districts, associations and NGOs. It is essential that populations should participate in adopting practices to combat desertification. However, considering their extreme poverty, they should not support the overall cost for the supply of this GPG. Such GPG could allow to increase the local financing of actions aimed at combating desertification and improve their efficiency – through partnerships involving governments, international organisations, banks or private foundations.

Global Public Good
As defined by economists, a Global Public Good (or Ill) (GPG) is a good that everybody can consume: consumption of such good by one person does not reduce consumption by others (e.g. the air we breathe). GPGs may be supplied by the private sector or by States. For instance, national forests are state-managed public goods when the State owns them. Biodiversity, determined forests or remarkable sites may also belong to private stakeholders who thus contribute to producing public goods.GPGs are goods whose product and cost transcend geopolitical boundaries and travel down generations.