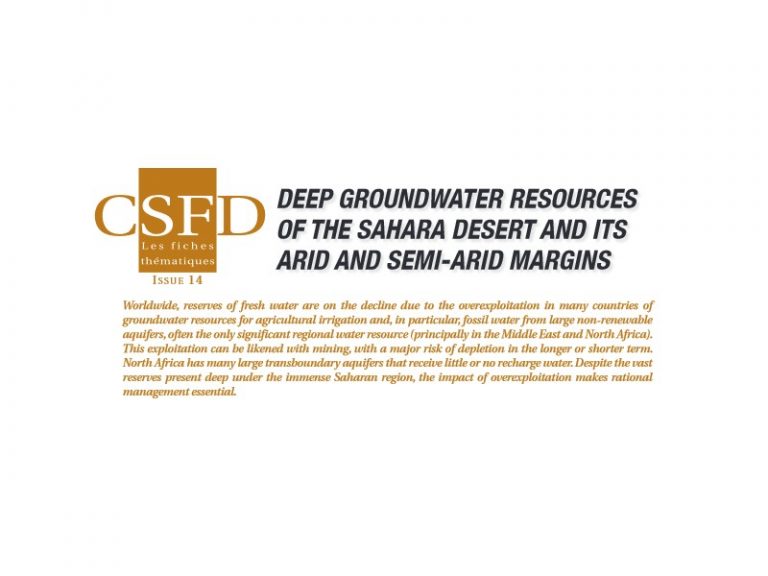 Apart from large river basins, the presence of fresh water in the arid or desert zones of the Sahara/Sahel strip, in the form of lakes or springs (oases), is often exclusively linked to the surface emergence of deep groundwater – considered fossil water as it accumulated in the rainy periods of the Quaternary period thousands or even hundreds of thousands of years ago. The overexploitation of these wetlands by humans (through drainage or pumping), or through natural emptying, results in their drying out and/or salinization and, as a consequence, the loss of their biodiversity. The preservation of deep groundwater resources is thus an important factor in combatting desertification.

There is ample evidence (rock paintings, tools, etc.) of the ancient presence of populated areas with abundant water and dense vegetation in Saharan and sub-Saharan areas. This suggests that underground reservoirs were filled from the central highlands of the Sahara, acting as a sort of water tower, or through infiltration from extensive lakes.

Today, the Sahara and the Sahel are endowed with a large quantity of water stored deep in the earth, the legacy of these ancient periods. Geochemistry and isotope hydrology (in particular carbon-14 and Krypton-81 dating) have shown that these ancient waters were fed by rainfall during periods of wetter climates (in the Holocene and late Pleistocene) than those of today. Desert oases are the only visible remnants of the hydrological activity of those epochs. They are the natural outlets of these deep aquifers, resulting from the pressure of water that infiltrated the ground thousands of years ago.

These aquifers are located in immense sedimentary basins. Several are found in the Sahel (the Senegal-Mauritanian Basin, Taoudenni Basin, Chad Basin and Iullemmeden Basin). Smaller than those in the northern Sahara (the Nubian Sandstone Basin and the Bas Saharan Basin), they are locally replenished by large rivers (the Senegal, Niger and Chari) and also receive surface water supplied by more abundant precipitation but subject to strong periodic variation.

The NSAS covers a surface area of around 2.2 million km2 extending over four countries (Sudan, Chad, Egypt and Libya). It is one of the largest reserves of groundwater in the world (storing 370,000 km3 of fresh water) dating from the Quaternary period. A number of studies – geological, hydrogeological, hydrochemical and isotopic – carried out in the 1970s and 1980s paved the way to the numerical modelling of how it functions and simulations of how it is changing based on different exploitation scenarios. These include the comprehensive model (2000) made by the Centre for the Environment and Development for the Arab Region and Europe and that of the International Atomic Energy Agency, which incorporates a paleo-hydrologic component (2009). Local models have also been developed around major wellfield areas in Libya and Egypt. These models agree that the exploitation envisaged in the coming years will not jeopardize the overall reserve for a period of several centuries. However, there is a local risk near wellfield areas due to excessive lowering of the water table locally (a drop in the piezometric level).

The Lake Chad Basin Aquifer System is found in the continental sediment stretching over three-quarters of the surface area of the orographic basin of Lake Chad (Chad, Cameroon, Niger, Nigeria and the Central African Republic). It consists of a considerable water reserve distributed between: 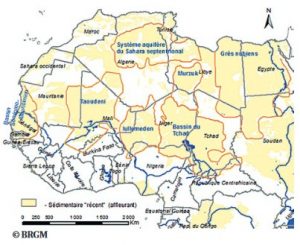 The NWSAS covers an area of approximately 1 million km2 (Algeria, Libya and Tunisia). It consists of two superposed reservoirs, with the Intercalary Continental (IC) lying below the Terminal Complex (TC). A synthesis of studies carried out since the 1950s led to a first model (1972), which was enriched with new data in the 2000s, making it possible to reconstruct how the aquifer system functions and to estimate a total recharge volume of 36 m3 /s and to put forward different exploitation scenarios to 2050. All show a significant impact of exploitation on the aquifer, representing up to eight times the renewable resources. These results were obtained from a collaboration between the concerned countries under the aegis of the Observatory of the Sahara and Sahel (the SASS I project), which led these countries to strengthen their collaboration (SASS II) in order to draw up operational recommendations for the sustainable management of water resources.

The gradual depletion of water resources, linked to the imbalance between recharge and discharge (natural or artificial) and the environmental consequences of this, raise the question of the sustainability of the water supply. Faced with the growing needs of local populations, effective control of the management of groundwater resources is necessary. The evaluation of the volume of water available and good knowledge of the origin and age of this groundwater contribute to defining the best exploitation strategies and limiting the impact of extraction. This impact is dependent on the position of water catchment works in relation to the recharge and discharge zones of the water table. Mathematical and digital tools help to understand the functioning of hydrosystems and changes to water resources according to different exploitation scenarios. They thus serve as tools for managing the potential of the resource according to projected needs and economic developments. However, the uncertainty of the models makes it nnecessary to monitor the evolution of the resource (flow rates, piezometric levels, etc.)

Coordinated management should be accompanied by the creation of intergovernmental organizations and supported by non-governmental stakeholders. This cooperation requires substantial financial resources at a national and international level to cover the costs of investment and renovation of installations, operation, maintenance and servicing. The rational management of groundwater resources can also be based on the concept of integrated water resources management (IWRM), which is still little employed at a transboundary level due to the natural, administrative, economic and social constraints specific to Sahara/Sahel countries.

Finding a standardized management method between states is fraught with numerous difficulties, sometimes linked to old historical enmities or a lack of political will. Added to this, technical, financial, institutional and administrative capacities vary from country to country. Furthermore, priority is often given to economic rather than environmental imperatives.

International law is currently not especially binding, and in practice coordinated management is more of a question of dealing with issues of competition between different uses and users while trying to limit environmental damage and social conflict. 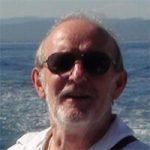