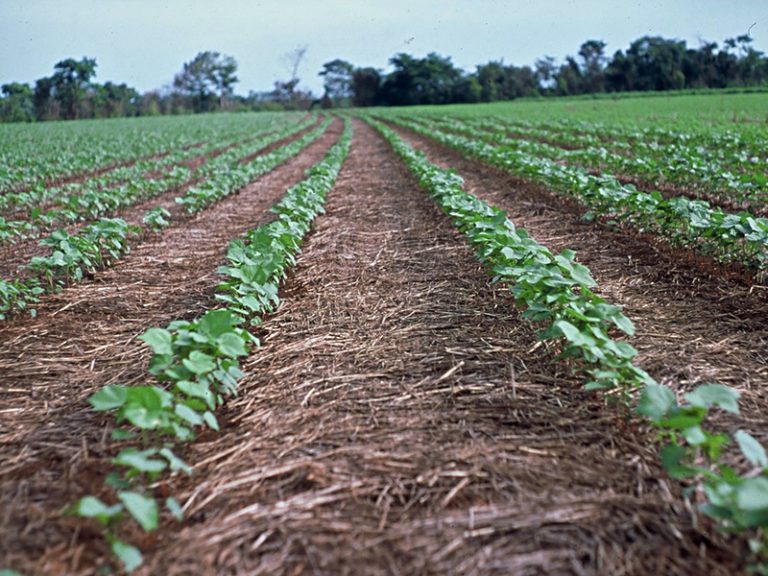 Five to seven million hectares of arable land disappear each year across the globe as a result of soil degradation. The causes are both climatic and anthropogenic. Regions affected by desertification share specific characteristics:

• Soils are fragile, poor and unproductive. They are extremely low in organic matter, which results in a poor soil structure. Soils have low porosity or are completely sealed close to the surface.
• Water supplies are rare and unreliable. Most rains are lost through run-off, meaning that crops, pastures and natural vegetation all lack adequate water.
• Dramatic climate events are frequent: rains tend to be violent, short and irregular and temperatures high.
• Oils undergoing desertification have a deep water supply (below 1 m), even in the dry season. It is unused by crop roots, which are unable to reach this pool (certain tillage practices result in ‘sealing’ the soil near the surface).

These characteristics, coupled with overexploitation of the land and its resources by man, bring about degradation of soils and the environment that can become irreversible. In areas threatened by desertification, conventional production systems are incapable of maintaining the soil’s fertility and production capacity. DMC systems offer an alternative solution to conventional cropping systems in southern countries.

The agronomic principles behind DMC systems
DMC systems are new ways of growing crops that have been developed and disseminated among small-holders in southern countries by the CIRAD (French Agricultural Research Centre for International Development) since 1985.They form part of what is known as agro-ecology.They aim to increase both the profitability and the sustainability of farming while also protecting the environment by respecting three principles at field level:
Direct seeding with no tilling
Permanent vegetation cover (either dead or alive) for the soil: grasses, legumes, etc.
Crop successions or rotations chosen to match the cover plants.

Agricultural and environmental benefits for the field…

The two primary aims of DMC practices are to fight the soil degradation and favour the regeneration of poor soils:

• Soil structure: Permanent plant cover provides efficient protection against erosion. It favours the infiltration of water into the ground, slowing run-off and thus protecting soil against water erosion. It reduces drying-out of the surface layer and protects the finer soil particles from wind erosion.
• Soil physics and chemistry: DMC systems raise and maintain levels of organic matter in the soil. This is a major factor in the physical and chemical characteristics of the soil (structural stability, storing minerals, etc.). Soil minerals are more easily available for plants.
• Water reserves in the soil: Water infiltrates better, humidity is preserved (evaporation is reduced) and water quality is improved. Higher levels of organic matter mean an increased capacity for water storage.
• Biological activity in the soil: Plant cover provides an ideal habitat for many living organisms. They in turn contribute to soil improvement by increasing soil porosity, decomposing fresh organic matter and encouraging the formation of humus. Cover plants also help keep down weeds.

…and also for regions, watersheds and landscapes

Broadening the application of DMC practices would have the following effects:

• Reducing or stopping wind erosion, which should significantly aid the fight against desertification.
• Indirectly, silting up of downstream reservoirs would be slowed and damage to other collective infrastructures reduced. Extensive and costly anti-erosion projects (protecting and restoring soil, water and soil conservation) are no longer necessary on land cultivated using DMC.
• With run-off greatly reduced, the downstream parts of the landscape, depressions, basins, low-ground areas and lower parts of glacis should no longer be flooded.
Both local regions and inhabited areas would be protected against sudden water influxes.
• Increased infiltration of water on the catch basin scale would allow water tables to rise by from one to several metres. Village wells would be less deep and would be less liable to dry up; the more regular flows of lowland hydrological regimes are beneficial for rice cropping, out-of-season vegetable cropping and livestock watering; stream flows would be more regular throughout the year.
• Higher rates of organic matter in the soil would help carbon fixing (0.5 to 2 tonnes/ha/year for at least ten years).

A successful experiment in Northern Cameroon
Since 2001, more than 200 small-holders have been testing DMC techniques (a joint CIRAD/Sodecoton project) planting cotton and cereals in rotation. Using cover plants during the first year doubles biomass production for a given field. The cover plant is either left in place or partly consumed by livestock. It then serves as mulch for the cotton grown the following year.
Fields where DMC is used show:
• Higher yields than control fields for more than half of the plots (+20% on average for cotton and +15% for sorghum)
• Better infiltration of rainwater (2% is lost by run-off under DMC against 25% under traditional systems)
• Reduced competition from weeds
• Less time and labour (101 man-days per hectare as against 109)
• Less onerous work (no ploughing and weeding)
• Higher net income (€ 301/ha up from € 225/ha, or € 3.5 compared to € 2.3 for each day worked).
Costs of herbicides and nitrogen are higher for the first three years (except when the plant cover is a legume).

• DMC systems reduce production costs: less fieldwork (weeding and tillage) is required, meaning lower labour and equipment costs.
• These systems require no heavy machinery or tractors, nor the massive use of inputs that most smallholders in desertification regions could not afford.
• After two or three years, yields are stabilised or raised, relative to conventional growing practices, thanks to improved soil characteristics and fertility. Growers’ incomes increase as a result.
• Crops can be diversified, making growers more independent of the vagaries of nature (the climate and diseases) and of market forces.

There are also advantages, which are not immediately perceived as such by the farmers, but which are beneficial at other levels. It is hard to put a financial value on them as they are mostly not commercial notions: reduced erosion, raised water-tables, carbon sequestration, etc.

DMC-related costs include the purchase of inputs (seeds, herbicides, etc.), training in the use of the required techniques and their dissemination. There is also a social cost because DMC systems involve major changes to farming practices and the organisation and management of individual holdings and communities.

Adopting DMC systems requires fairly complex technical and intellectual investment. They represent a whole new farming paradigm involving periods of adjustment that can be relatively long, requiring many agents in the field and profound changes of mentality that can take from a few years to one or two generations. DMC systems are not a simple package of techniques to be taught. They are a coherent set of practices, methods, systems, etc. The process of change can come up against cultural and social barriers related to the principles of traditional agriculture: ploughing, keeping fields ‘clean’, etc. That is why it can mean changing a whole way of thinking not only for farmers but for all the stakeholders involved, at associative, political and institutional levels.